The Maths behind Neural Networks

Between the perceptron discovery in the late 1960s and the AlexNet Convolutional network in 2012 which ushered the field into the mainstream, backpropagation, neural network architecture and related techniques were honed to the modern state by many.

If you want a quick look at the some of the known contributors you can start from the reverse mode of automatic differentiation - a mathematical paper around the 1970s by Seppo Linnainmaa. This could have been a base for Geoffrey Hinton, David Rumelhart, Ronald J. Williams paper around 1986 for the backpropagation algorithm for neural network, which could be the base for Yaan Le Cun’s convolutional neural network for handwriting recognition of digits around 1998-2000 Reading Handwritten Digits A Zip Code Recognition System, which could be the base for Geoffrey Hinton’s student Alex Krizhevsk’s deeper and better Convolutional Neural network ImageNet Classification with Deep Convolutional Neural Networks called AlexNet around 2012. And in 2012 AlexNet left all other ML-based competitors (HOG, HAAR based) far behind in the ImageNet competition.

Beyond this very brief and shallow overview, one needs to refer to a deeper study like Deep Neural Network history Deep Learning in Neural Networks: An Overview Jurgen Schmidhuber and the many people who have contributed. The Wikipedia [history of Backpropagation] shows how many times it has been discovered and re-discovered, from control theory applications to neural nets

Frankly, it does not matter who. It matters how, as it can give an insight into the discovery. But there are quite a lot of overlaps in that short history and quite many brilliant minds contributing, that it is not that linear, to afford us further insight. Suffice it is to say that from 2012 neural network was no more a niche academic field.

Before we go to more complex topics like, let us see the simpler problem, the problem of Optimization.

Before the gradient descent method was discovered, optimization of a differentiable function was done by Newton’s method, also called Newton -Raphons method.

The intuition regarding this is something like below. Assume that we need to find the $\sqrt16$. This is the same as solving the equation $x^2 − 16 = 0$.

What we do in this method is to start with an approximate value and iteratively improve. Assume that $x_0$ is the initial value that we have taken. The derivative of the function at $x_0$ is the slope of the tangent at $x_0$. The main intuition is to take this tangent line intercept at the x-axis as a new point,t and the process is repeated iteratively. 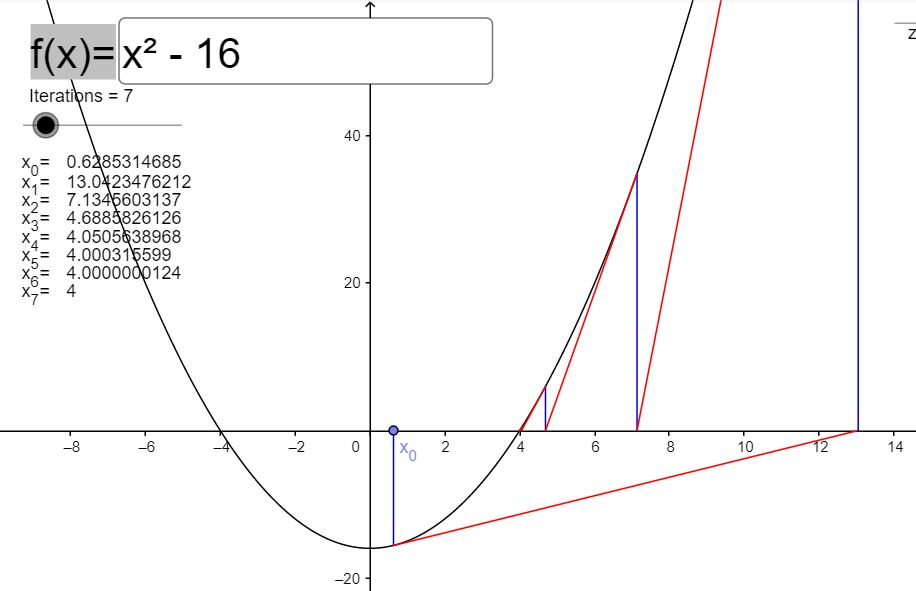 You can see that in Newton’s method we need to take the second derivative of the function to solve the equation. This makes it more complex than Gradient descent, which only needs the first derivative.

The gradient descent method is much simpler than Newton’s method. How it relates to ML is by the concept of Cost function or also called the Loss Function

It is a function wich represents the difference between the expected value and the actual value as the base.

To make sure that the error is not skewed if the variance is above or below the function, that is positive or negative, we take the square of the difference, and since we are not usually looking at one value, but a set of values, we take the mean of the count of variables. This is the Mean Square Error cost function.

Where $X_i$ is a vector of calculated values and $\hat Xi$ is the vector of expected values.

This is usually for regression problems in ML. For Classification problems, we have cost functions like Cross-Entropy Loss or Hinge Loss/Multi-class SVM Loss. More details regarding different loss functions here https://medium.com/@phuctrt/loss-functions-why-what-where-or-when-189815343d3f

Note that all the Cost functions used are continuous functions, that is they are differentiable. This is an important part as else we cannot apply gradient descent. For Classification loss or cost functions, the output is a probability distribution between 0 and 1.

Now we need to find the values of weights that can minimize the function.

Let’s take a closer look at optimizing the cost function. Let’s talk about linear regression (line fitting) ML algorithm and optimizing it using Mean Squared Error via Gradient Descent. This is the simplest to explain visually and hence we too use this for illustrating.

In the diagram below the red line ($y= mx +b$) is the optimal line that one can draw through the sample set. The slope m and constant b is learned by the gradient descent algorithm. The x y-axis could be some data set like house price to area etc, which we have, and once we find a fitting line, we can plugin other values of x to give predicted y - regression.

The loss function we use here for regression is a quadratic function (parabolic shape), and the optimal is at the trough. There is a lot written about gradient descent and hence I won’t repeat it here. But the below diagrams could jog your memory.

To explain geometrically,We start at a random point, get the slope of the cost function at the point.

In the case of MSE, we have just two variables weight and loss, which we can plot as below, and the derivative of the function is simply the geometric slope of the function.

Example for a function $F(x,y,z)$ in three variables, the gradient vector is

But the intuition regarding solving it is the same. Instead of the simple slope as in the case of two-dimensional loss function like MSE, we take the gradient vector and follow the negative to the gradient, with some constant selected as the learning rate. The constant is so chosen, that we decrement in short steps, and reduce the risk of overshooting the minima.

In the next part we will see where the gradient descent comes into play in neural network learning.